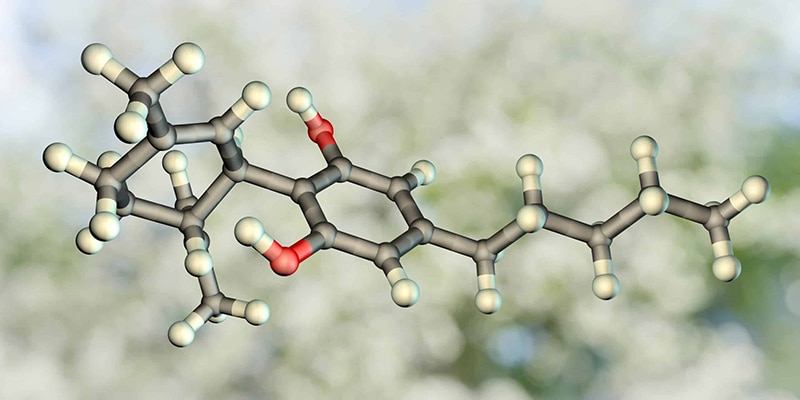 Animals use a very well-developed immune system to protect themselves against microbial attacks, parasitic diseases, and viral infections. Plants, however, do not have an immune system. Instead, they protect themselves by secreting very specific secondary metabolites¹ that may be toxic to certain animals, insects, parasites, and fungi present in their environment (Mechoulam & Hanus, 2004). These metabolites can also have other roles, such as attracting pollinators or playing a part in the senescence² of the plant.

Among these molecules, we find the phytocannabinoids family. Although there is little understanding as to why these molecules are present in cannabis (Backes et al., 2017), many studies could soon shed some light on the question. In any case, it is highly unlikely that they exist solely to be enjoyed by Homo sapiens. Over 150 phytocannabinoids have been identified but the vast majority of these molecules are produced in very small quantities, which makes them difficult to analyze. Research on primary phytocannabinoids has been booming since the recent wave of legalization and decriminalization of cannabis and cannabis by-products around the world. As we mentioned in the article about the endocannabinoid system, the body produces its own endocannabinoids molecules. Phytocannabinoids, on the other hand, are metabolites produced by the cannabis plant in the form of carboxylic acids³. Under the influence of heat or light, upon combustion, vaporization, cooking, or even under the influence of time, these phytocannabinoid acids are converted into their neutral chemical forms (Backes et al., 2017). Following a process called decarboxylation⁴, the acid forms THCA, CBDA, CBNA, and CBCA, to name a few, are converted into the commonly known cannabinoids THC, CBD, CBN, and CBC.

Therefore, cannabis plants or dried cannabis flowers contain very little THC per se, but rather a certain percentage of dormant THCA, awaiting to be converted into its neutral psychoactive form. This explains the labelling we can find across Canada on dried cannabis containers which shows the active THC and CBD content at the time of purchase, as well as the total content once decarboxylated. Even though the acid forms of cannabinoids most likely hold therapeutic and medicinal virtues, we mainly use their corollaries devoid of carboxyl groups. Phytocannabinoids are relatively nontoxic, which means that it would be virtually impossible to administer a lethal dose to a human being (Backes et al., 2017). This explains why there has never been a single death directly attributed to cannabinoids (Backes et al., 2017).

1 Secondary metabolites are chemical compounds synthesized by plants (photochemical compounds) and are responsible for non-essential functions, which makes their absence benign to the organism, as opposed to primary metabolites. Secondary metabolites are involved in the ecological interactions between the plant and its environment.
2 A physiological process causing the slow degradation of cell functions (specifically cellular senescence) and the aging of organisms.
3 The term “carboxylic acid” refers to a molecule composed of at least one carboxyl group.
4 Decarboxylation is a chemical reaction during which a carbon dioxide molecule (CO₂) is eliminated from an organic molecule carrying a carboxyl group, generally as a result of heating.

Mechoulam, R., & Hanuš, L., (2004), « The cannabinoid system: From the point of view of a chemist » In D. Castle & R. Murray (Eds.), Marijuana and madness: Psychiatry and neurobiology, Cambridge University Press.

This website contains information about cannabis and is for adults only. We need to confirm you are old enough. Please select your province and enter your date of birth.